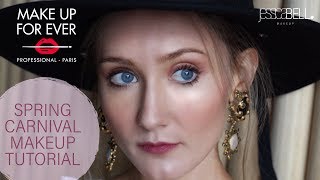 Make Up For Ever Spring Carnival Makeup

My passion for makeup came at a very young age when my Mother found me missing at my fourth birthday party. After the initial panic had subsided I was discovered in the shed with a powder puff in one hand and a mirror in the other and the rest is history.

I Unknowingly started my Career as a makeup artist when I was in my final years of school. It was never something I thought I would choose as a career rather it was something that chose me. I had always thought I was going to be a Graphic designer but the world had other ideas. As part of a final art project I decided to study the history of art on the human body. I painted detailed body art pieces and photographed them on models,  I was starting to move my art from a stretched two dimentional canvas to a three dimentional human canvas. This is still very much how I see makeup artistry today, it is stillan artpiec just on a different type of canvas.

My family comes from a theatrical background so as a child I was constantly around many of the characters from the theatre and I was strongly influenced by them and all of thier creativity in their character. My family still have all the old costume designs from our time at Her Majesty’s Theatre in Melbourne which have continued to inspire me today.

I studied 3 years as a graphic designer but all I could think about was makeup. Finally after realising that graphic design wasn't for me I went to Victoria University of Technology and studied a Diploma of entertainment makeup.

After I had finished the year long course I moved to London where I spent the next seven years perfecting my art. Here was where I really found my gift. I worked for many different brands as I was trying to find my feet in a new county and I finally settled with Laura Mercier at Harvey Nichols and then moved to Harrods as part of a Pro makeup team put together by Harrods. This is where I was able to find my passion for photographic makeup in the photo studio as Harrods did all of their advertising in house. I also had the privilege of using the VIP rooms for celebrity clients as well as the numerous fashion shows they held there. I was also part of a small team of makeup artists that was recommended by the Bridal boutique Pronovias.

After all this time my love and passion for makeup has only become stronger. I’m a firm believer in the art of makeup and also the confidence and creativity it can inspire in others. To create a  signature look for someone or even to be able to replicate a red carpet look tailored to a specific face shape and personality is an art in its self. We are not all the same we are unique in out looks and styles and makeup is a representation of that.